We need to make sure that our classrooms are places that students can come as they are and be appreciated for the experiences and strengths that they bring.
-Christina Moore

Our web environments can be wonderful places of accessibility.
-Christina Moore

Natasha Jankowski shares about intentional and transparent assessment on episode 259 of the Teaching in Higher Ed podcast. This is much more assessment with and not to students.
—Natasha Jankowski

Transparency for me is more than just posting it somewhere.
—Natasha Jankowski

How can you both share that love and excitement but also instill it in your students?
—Natasha Jankowski

Brian LaDuca shares about applied creativity for transformation on episode 279 of the Teaching in Higher Ed podcast. How do you take the concept of novel new knowledge and those aha moments and give them purpose?
-Brian LaDuca

We have to find a way to find these micro campuses on the campus to create pivots.
-Brian LaDuca

It’s the ambiguity that is the lock and key to the content and the resulting action is the tension.
-Brian LaDuca

The right and wrong answer isn’t nearly as important as your ability to filter down ideas, work together in ideas, and move ideas back into the system again.
-Brian LaDuca

Applied creativity inevitably has to be applied to something.
-Brian LaDuca

Meet the student where they are, in what they do, and how they think.
-Brian LaDuca

Angela Jenks on episode 289 of the Teaching in Higher Ed podcast. The farther you get in a field, the more differently you read.
-Angela Jenks

Looking for open education resources is always good, no matter what field you are in.
-Angela Jenks

I think the most important thing is thinking about the syllabus from a student’s perspective.
-Angela Jenks

Save to Listen Later
Podcast: Teaching in Higher Ed
Episode: Reaching All Learners Through Innovation and Teaching Excellence, with Edward Leach
Pub date: 2019-09-26

Edward Leach shares about Reaching All Learners Through Innovation and Teaching Excellence on episode 276 of the Teaching in Higher Ed podcast. There isn’t a lot of focus on what it means to teach at a community college, which is totally different than being at a four-year institution.
-Edward Leach

The most critical aspect of the teaching and learning process are the faculty members in the classroom.
-Edward Leach

Nicola Ulibarri explores Design Thinking in Teaching, Research, and Beyond on episode 274. Design thinking is a creative problem solving methodology that starts from understanding and addressing human needs.

Innovation is a learnable process. The act of predicting can enhance our learning.
—Bonni Stachowiak 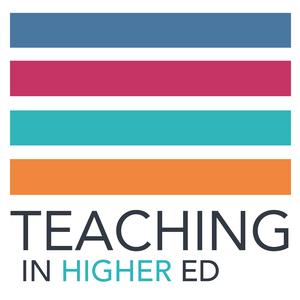